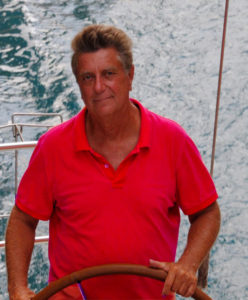 Captain Daniel is our chief captain of the Mediterranean and a pillar rock of experience and knowledge on all layers and aspects of yachting. Daniele, or Danielo as the Greeks call him, is Italian by birth, half Belgian by origins and Greek by adoption. His life story is a rich picture of a world-traveller at heart and fearless adventurer of his own kind. His sailing passion begun at an early age as a young boy who lived in a fishing village not too far from the stunning Amalfi Coast. Sailing school, both national and international sailing races soon became his primary interest and the insuperable love for the sea traced his years throughout the youth. His sailing techniques and expertise were extensively deepened with the years as he was asked to direct and teach sailing in his hometown local club. All through his college and university years, he would expectantly and impatiently wait for the week end so that he could hop on a train and train for the next sailing championship be it spring or cold autumn and winter times, he would not miss it for anything in the world. He remembers dearly the navigation and mentoring received by the world famous Italian veteran of the maritime arena, Agostino Straulino (read his biography here), a one of a kind sailor of the another era, cherished by the sailing community in the Mediterranean as a highly honourable and respectful seaman of great values and ethics. Graduated as Medical Doctor in Rome, Italy, he is specialised in general surgery and also specifically in dentistry.  After serving at the Siena hospital surgery department, he has run several of his own practices and achieved a renown reputation as he both passionately and also selflessly served his community in Gaeta and Fondi, Italy. Even though working in highly intensive fields, his summers would be spent onboard private yachts, initially, captaining medium and large sized power and sailing yachts. Shortly after that, in his early twenties, his self-funded his first yachts of considerable size (60+ feet) and was amongst the very few individuals to pioneer professional high-end yacht chartering in the Mediterranean offering a luxury service with three to four crew members in charge. Despite his young age, he had already had an impressive experience and in-depth knowledge and he got to spend half year in most famous and enviable Italian and French riviera attended and associated with nobility, politicians, celebrities and aristocracy. By then, his reputation in the field was blossoming and he was on demand by high-net individuals whom he had the honour and the pleasure of hosting and taking care of onboard his yachts. Numerous film crews and stars would rent the vessel for several weeks while the shooting on nearby isles was in the process. Years of both hard work and great times for him and his crew. He would then be back to the ‘real’ life, i.e. the every day city environment and go back to his surgery and dentistry. Somewhere in between the surgery and boating years, he also managed to run a stone mine in Latin America, Venezuela for two years going back and forth to Italy (not to miss the stories he tells on that experience and living in the Amazons jungle). Just so you know, in case of emergencies, there is a permanent full set of dentistry tools onboard, seldom used on remote islands where his friends and the elderly have difficulty being treated or have no means to. As one might imagine, there is an entire pharmacy, so to say, onboard for any needs his guests may have from motion sickness to severe allergies. Having a medical doctor onboard.

is particularly appreciated by our families with kids. Until one day he decided to make that final leap and switch it once for all: give up the doctor life altogether and go sailing! It was ‘love at first sight’ -his own words-, when he spotted the boat he was looking for to pursue his life dream of living on the water: his ‘Marion Seagull’, the classic Bénéteau Oceanis 510 Clipper. After owning and skippering several yachts, Daniele had the objective of getting himself a manageable size sail boat, that would be just fine off with two members of crew only, whereby the high level of service he was used to practicing on big yachts would be transferred onto a 15 meters (51 feet) vessel that is homey but comfortable, spacious and private enough for both guests and the crew. He will tell you how the encounter happened and what the boat name signified to him. He has now been successfully chartering his boat for fifteen years offering a unique service of high end luxury yachts on a medium sized boat at affordable rates. As one would expect from a quintessential European closely faithful to his and his family roots, Daniele is also an excellent chef as cooking has been another passion of his since his university days. For a few summer seasons, he has also owned and run two Italian restaurants in Greece with great success amongst tourists and the locals. Given the diversity of his Southern European culinary heritage, the cuisine is both almost religiously traditional and strict in preparation, faithful to its background and also complementary in utilising fresh and organic local produce to slightly adjust the experience of a local touch. He will spoil you with his simple and light yet fantastic pasta dishes skilfully prepared with most genuine olive oil, the renown Greek Kalamata olives, fresh tomatoes, sweet onions, Mediterranean herbs and spices. Music and singing evenings at anchorages in solitary i.e. private bays during charter weeks are also almost regular events as the captain is a great musician. Coming from the centre-south of Italy where music is an integral part of living, Daniele has always been in a band and his home was a permanent theatre for him and his musicians friends. Piano is his thing, but a little challenging to install on a boat hence the guitar does a pretty good job. Daniele’s mother tongues are Italian and French, he fluently speaks Greek and Spanish, manages English and basic Turkish. Such a unique crafted mixture of high excellence in customer service, immaculate professionalism and conduct ethics (discretion and respect of privacy to name a few), unbeatable expertise in all local areas, exceptional seaman whose top priority is always safety of passengers and the boat, his personality and his background will make your vacation unforgettable. Daniele’s numerous achievements and international prizes public professional profile click here. 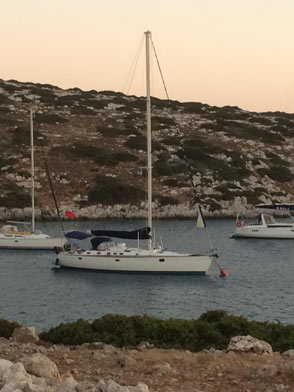 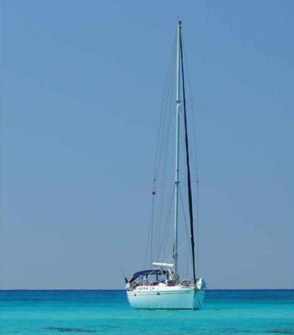 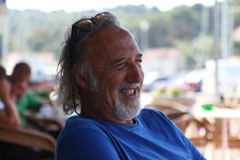 Cap. Oscar Mucignato, and a great time we had on a random sailors gathering on Solta Island, Croatia in May 2009

Born and raised in Navy environment, Oscar accompanied his father in the Naval Academy and learned to sail with a guy named Agostino Straulino (Star Class Olympic Gold Medal). He then sailed in many seas and oceans, warm and cold waters, as a bosun on the Italian Navy sailboat ‘Stella Polaris’. Not easily chained by strict discipline, just as his alike species, he soon cast off for himself, seeding a wide network of relationships in most Mediterranean countries. Oscar has a large dynasty of five (three sons and two daughters) that he coaches and inspires year after year. He knows nearly every harbour, wine, tavern and bay between Turkey and Gibraltar. Oscar lives between Istra, Croatia and Trieste, Italy during the rest of the year and he enjoys building his own sailboats in an improvised and home made shipyard in the outer villages of Northern Croatian landscape. His winters are usually enjoyed on sailboats in the Caribbean, Grenada and the BVI’s. Oscar will tell you the most incredible stories of his life time long journey in the five continents, of the tales and the experiences comparable only to the good old Indiana Johnes. You wait and watch him show you around his very waters. 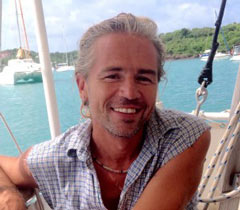 Alex Skerl, just arrived to the Caribbean after a long Atlantic Ocean crossing from the Canary Islands. November 2014.

Alex is among our youngest expert captains in the area and we are proud to have him onboard. In his late thirties (and there is no way would guess it, trust me!), he was born in Trieste, Italy in 1975, another sailor since birth. After graduating he ventured off following his biggest passions: travelling and music. On one hand backpacking ad hicthiking gave him the opportunity to discover different countries and peoples. From Asia to the Americas, from Oceania to Europe he has had amazing opportunities to work in various vests, from being a deckhand on ships, picking fruits, working in hospitality, maintenance on sailboats, bar tendering to playing music for recreation. In between his world travels and work careers, Alex would often refuge into the world of words and chords. He enjoys composing music with his band, and then exhibit it on their

short tours and performances in Italy and the neighbouring Mediterranean countries. Alex’s life changed once again, but this time a little more radically, back in 2005 with the idea to live permanently onboard his own 30 feet sailboat while crewing during the summer season on charter yachts. He sails around between the Mediterranean and the Caribbean for the rest of the year with his partner, Laura (read more on her profile on this page), as he does some sail repairing and canvas jobs as a contractor for other vessels.  He eventually moved from the Adriatic Sea (Italy and Croatia) to Greece which has ever since begun his actual home. After the Mediterranean summer season is over, by October – November each year, Alex and Laura sail off heading West to the Canary islands, Cape Verde and at last they cross over to the other side to spend their winter in the Caribbean. He is working on his dream to continue on West-ward across the Panama Canal and return to Asia by taking the longest, and the slowest, route there is. Alex is extremely knowledgable in the Greek isles area, he lives on Lefkas island in the Ionian part of Greece (the closest to Italy). Alex and Laura are very much loved by our guests for their friendliness but also discretion. His expertise in all aspect of sailing makes him a sought after captain and his reputation is excellent. 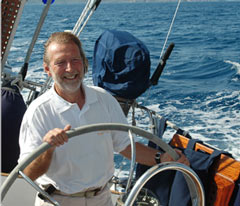 Roman from Vienna, skipper & owner, has 35 years of sailing experience. He loves the ocean, sailing, and life in general, and is famous for  his refined skipper cocktails. He is fluent in German, English, French, and speaks Italian, Spanish and some Turkish.

Duties and Responsibilities of your Captain

Before you embark, especially if this is your first time, I suggest you get familiar with your crew duties and responsibilities so that you will know exactly what to expect from them. This is what your captain and the crew is responsible for:

Sandra is excited you are gaining an interest in trying out our Greece sailing trip as your next vacation. Let us start working towards it together and have fun arranging it to the very last detail. 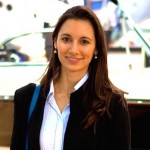